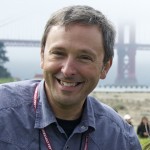 While many people know of my work with YouthLearn, not many realize that my background is in fact in filmmaking. In my early days, I worked as a freelance producer and editor on a range of documentary, educational, and commercial projects. Some 25 years ago, I was asked to lead a documentary project with a group of teenagers on the far west side of Chicago. The vision and artistic creativity of that first group of young people was truly inspiring and led to my working exclusively with youth – first in documentary production, and then gradually on a range of collaborative media creations, including installation art, web design, photography, and audio projects. For each team of youth producers I worked with, it was always critical that the young people develop a sense of the broader media world around them, its leading forces, history, and politics. To truly be effective consumers and producers of media, young people, especially those in marginalized communities, need to be literate in media methods, and in this information age, digital and information literacy are essential if one hopes to be a full citizen in our global community.

For those living on the edges of society, today’s glut of media content can be both beneficial and divisive: it can be a source of deep educational content but it can also serve to further isolate those outside the dominant culture. It’s not enough to simply have access to the various media channels. Most media content reflects varying degrees of bias, intent on promoting a certain point of view or creating demand for a certain product or idea. A truly literate individual must be able to decipher meaning in both words and symbols so that they might make informed decisions about the information they’re consuming.

In my work with urban young people in the U.S., I was amazed to discover that they often viewed themselves as invisible in the vast media landscape. Despite so much commercial and entertainment content targeted toward them as consumers, urban youth frequently feel that mainstream media does not reflect their lives as they truly live them. Their peers and communities are often portrayed in a stereotypical, negative fashion, and stories in the news are rarely more than crime reports. Educators need to pay special attention to how youth find or fail to find themselves reflected in the media and encourage them to use feelings of isolation as opportunities to address issues of disparity, bias, class, and equity. Media literate young people define their relationship to media content rather than let the content dictate their place in society.

Clearly the United States dominates the media arena. The content and production methods employed by U.S. mainstream media producers sets a standard for the field but does not always reflect the diversity of opinion or the day-to-day reality of others throughout the globe. Dominance does not always equate to usefulness. Frequently, the most appropriate, effective content is created on a local level, by producers who know the needs of specific communities because they themselves are members of those communities. For this reason, young people are often ideal media producers, using the tools of their generation to communicate to their peers and caregivers.

Unfortunately, channels of dissemination for this alternative content are rare. Young people are not as familiar with alternative media, and without a point of reference, their initial forays into production typically imitate what they’ve seen on television or mainstream media. Educators working with youth should make an effort to share alternative work and expose young people to a range of styles, standards, and points of view. It’s also extremely important for young people to understand the difference between commercial and non-commercial content. While one is not better or worse than the other, frequently commercial content can be disguised as a service or entertainment, when it is in fact attempting to market a product. With each media experience, whether it’s print, web content, broadcast, or streaming media, consumers need to learn to ask key questions about the intent of the producers:

Who are they? Where are they from? What are their attitudes and values? What are they attempting to achieve through this work? Are they trying to change my perspective in some way? Do I agree with their point of view? How can I respond to their work?

Too often those whose lives have been saturated by media content assume that their role as audience and consumer is passive. In fact, if media content is to be truly meaningful, it needs to reflect a relationship between the producer and consumer that is essentially a dialogue. The more our students know about the intention behind various media and how to interpret content, the more they’ll begin to use technology as a tool for their own self-expression and personal development.