Deep in the jungle of western Uganda, youth from around the Nyarushanje sub-country journeyed over four kilometers a day to participate in a new initiate on media making. The Youth Media Initiative (YOMI), led by Henry Sempangi Sanyulye, worked in partnership with PeerLink Initiative Uganda (PELI-U) to lead an intensive 2-month youth media training. In the end, seven youth made the trek and completed the extensive coursework designed to equip youth with media literacy and production skills – to enable them to create media on issues that affect them, find solutions to these issues, and use their newly developed production skills to improve their livelihoods. 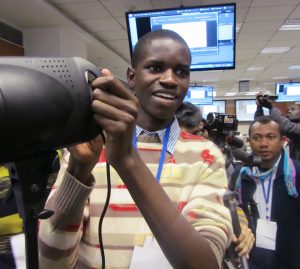 I had the pleasure of meeting Henry in 2012 when he attended the Adobe Youth Voices Lead Educator Training in New Delhi, India. At this training, Henry was inspired to take the youth media approach to learning and bring it to hard to reach youth, those with limited access to resources such as the Internet and digital cameras. This is how YOMI started. Recently, I had the opportunity to catch up with Henry to learn more about YOMI and the training he led in this remote village of Uganda.

“I have a story to tell around getting the learners from zero to believing in themselves that they can produce media and expose their creativity, despite the limitations they have in their communities.”
– Henry Sempangi Sanyulye

The project had ambitious goals and many obstacles to work through before the real learning could take place. For starters, adjusting for the distance that youth had to travel to participate, a 4-week youth media program turned into a 2-month long project. 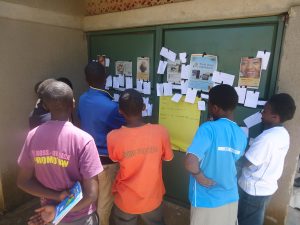 Youth participating in a scaffolding activity

Another significant factor was the amount of time needed to build the young people’s confidence so they would see themselves as creative artists. The collaborative learning environment was new to the learners, and for many it was the first time they were being asked their opinions and perspectives on topics important to them. Through scaffolding activities, such as acting out skits and providing opportunities for creative writing and reflection, Henry worked to create a culture where creativity and self-expression were the norm.

The youth learners also had limited exposure to media production tools and computers. Just as with building their confidence in their creative skills, Henry took a similar approach to building their media production skills – through scaffolding activities. Youth engaged in media literacy activities that provided opportunities to interpret media messages, critique media, and explore a variety of media forms and formats. Through completing short media projects, youth were able to build their skills using a variety of tools, including digital cameras, graphic design, and video production and editing.

All of this work culminated in three exhibition events hosted in different communities, organized by the youth artists. At the events, youth showcased their final projects and engaged in conversation with the audience about their work. Through sharing media, youth were able to demonstrate their skills and ultimately shift the perspectives of many community leaders. The youth also came to recognize that their voices mattered and their communities were willing to listen. 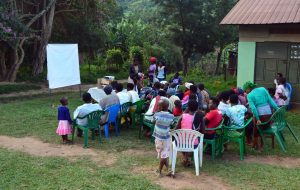 Youth setting up for their media exhibition

Furthermore, they had fun! The learning went beyond the technology tools – youth learned how to express themselves, work collaboratively, and interact with their community in new ways. The program even challenged notions of what learning looks like for leaders in the community. Youth who participated in this training are now regarded as trainers in their communities and continue to train others in youth media.

YOMI is currently looking to grow their program to reach more youth in other rural areas of Uganda. To learn more about YOMI and to see the youth work, visit them on Facebook: https://www.facebook.com/youthmediaintiative.

A very special thank you to Henry for sharing your story with us!
Contributed by Kate Goddard